Londonwiki is a wiki about London history

This site is obviously about London history. It's an old site. I cover a number of topics which have interested me over time.
It starts with some detail on Julius Caesar, then early Roman London, and onto an early introduction to the remains of the City wall of London and also some later research from 1926 about the walls, and then a Commission in 1928 to map the London Wall then.
Some Kings & Queens - to 1065 and then the Kings and Queens to date.
I have an interest in Londons lost rivers, particularly the River Fleet & the Fleet market as once existed. I will add more to this area.
The new London Post Office at St Martins le Grand,
My best addition is that of the 1832 street directory with images added for much of 1842. I use this all of the time in my own research. There is also a partial 1818 street directory, and a  complete 1843 directory, but much of this is online already.

I am currently adding a brief description to Hungerford market, as it had a number of Taverns. Plus an introduction to the Charing Cross railway terminus replacing the same by 1864.
Of more use is the 1921 London street directory which covers many areas, particularly East and EC areas; plus a bit of the 1940 street directory. All of these are in the search engine.

In 1920, the London County Council created a book commemorating all of its employees who served in the Great War, i.e. the First World War ) 1914 - 1918. This is a summary listing of many thousands of employees and some brief detail about their service.
I also list from a number of sources, a simplistic breakdown of the campaigns which happened during this period.
Also listed on a separate site are a number of individual regiment histories, e.g. the Artists Rifles and the First Sportsmans and a number of Gallantry awards.

Lastly for the moment, the site I have been building on the London TFL and National Rail stations in London, with some detail and photographs relating to accessibility is now on this site. Its not bad, where I have visited a station (there are 600 in total). Any help in this massive task is very welcome.

Much of my detail relates to pub history on other sites, e.g. the pubwiki, and this is all in the search engine.

Layers of London & mapping the pubs in London. 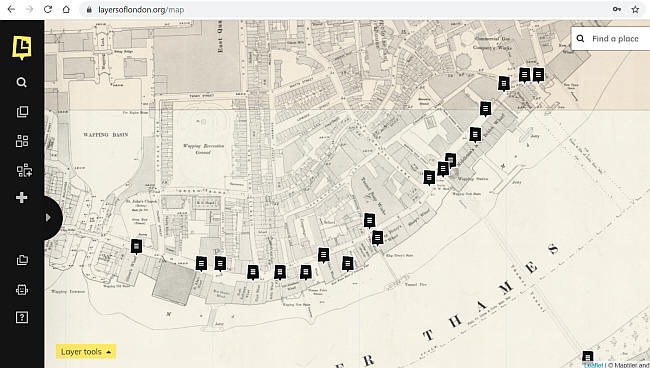 An example of the pubs along Wapping High street, most are closed long ago.

Excavations of the London Wall