The introduction to the Golden cross bridge (opened in 2002) , which spans the River Thames between Charing Cross railway station and Southbank is to also describe means of accessing the same if a little inaccessible.

My walk started from the Embankment station which is not accessible due to steps down to platforms. Neither is the walkway up to the Golden Cross bridge. 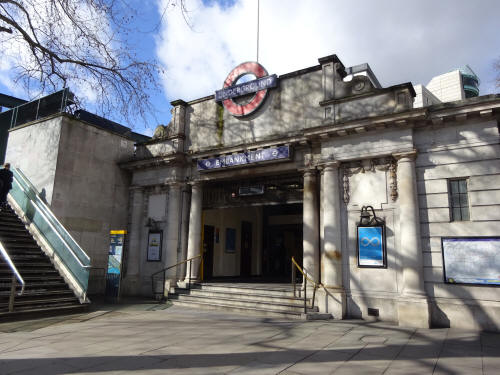 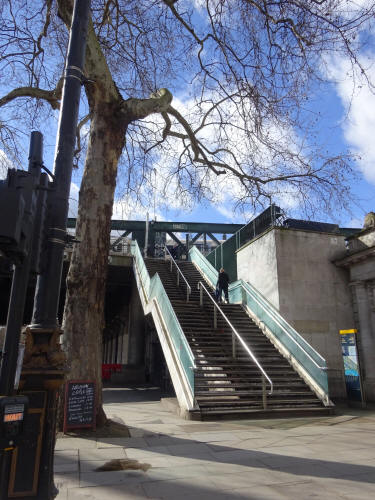 The stairs up to the Golden Cross bridge, from the Embankment - March 2020

I can climb stairs, but is there an easier way to get up to the bridge? I have not counted the number of stairs, but there must be 30. I retraced my way back through the Embankment station and exited at the rear. 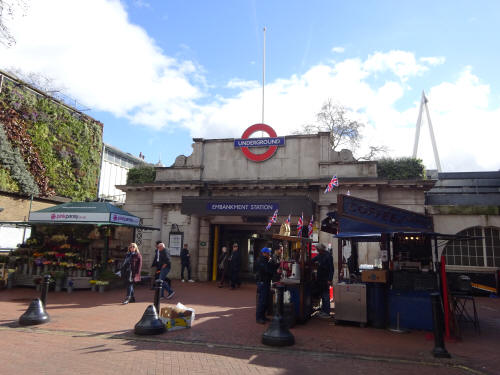 There are also zero steps out of this exit / entrance. 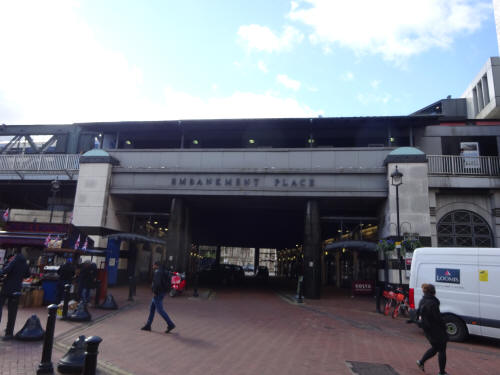 I did not wander under the bridge, as this defeats the object of getting up to its level. Lets try a walk along Villiers street, which has a very slight gradient. Just out of the shot is a coffee shop which was formerly the Griffin Tavern; and as we walk up Villiers street, the Princess of Wales is on the right hand side. There has been a public house here for at least 150 years. This is quite an important landmark, as there are the entrance to the Arches here, as is a further set of stairs up to the bridge. 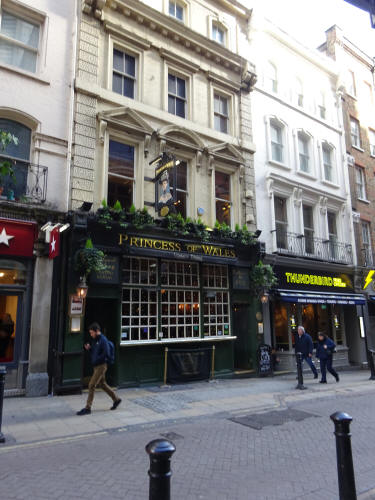 I actually discovered later that on entering the Arches, there are a pair of escalators which take you up to the bridge level. Most people were using the stairs, and entirely oblivious to this fact. 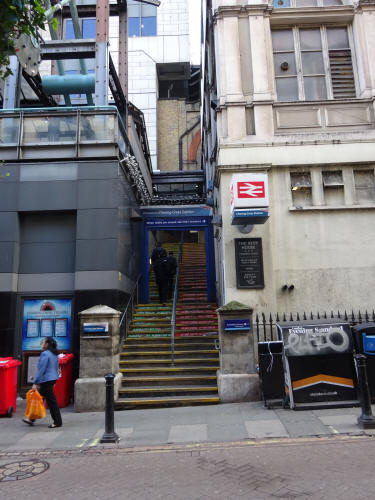 Stairs up to Golden Cross bridge, opposite the Princess of Wales -in March 2020

Continue walking along Villiers street, and you arrive at the Strand, and alongside Charing Cross Railway station. This is a large National rail station which is very accessible, and all at street level. The station was built in around 1864 to replace the then Hungerford market. The rail lines project across over the River Thames, with the tracks being on the Hungerford bridge. These mirror the original Hungerford market lines, which existed below, about 160 years ago. 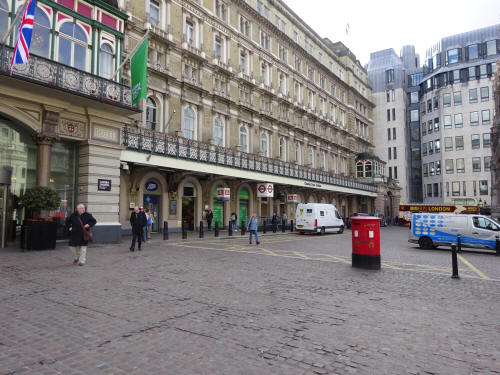 Charing Cross Railway station frontage from the Strand - in March 2020

If we enter the station, there is a large concourse with lots of food suppliers, restaurants and toilets which are 'free' and clean. There are accessible toilets, and everyone else needs to access via a number of stairs. 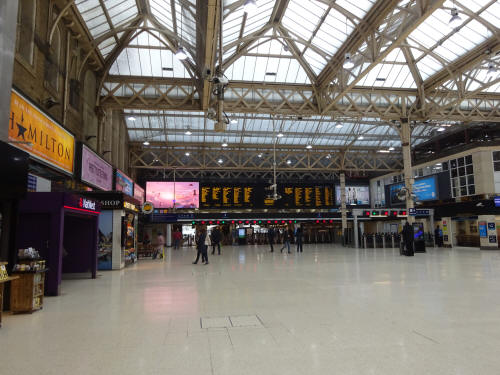 The concourse at Charing Cross, with shops and restaurants in March 2020

If you want to access the Golden Cross bridge which is a walkway across the River Thames with stunning views, you need to walk to the left side of the platforms, just below a very bright advertising screen. 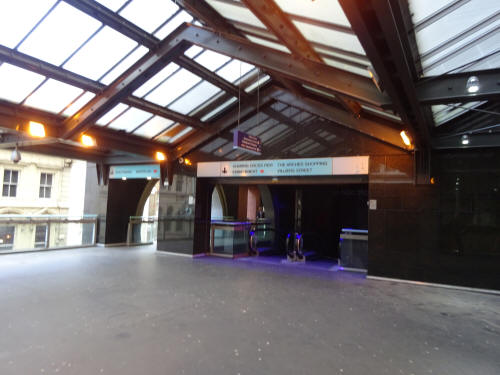 Keep to the left, and there is a flat walkway alongside the station heading towards to River Thames and the Southbank. The signage is also signposted for Waterloo station, which is on the south side of the River Thames. 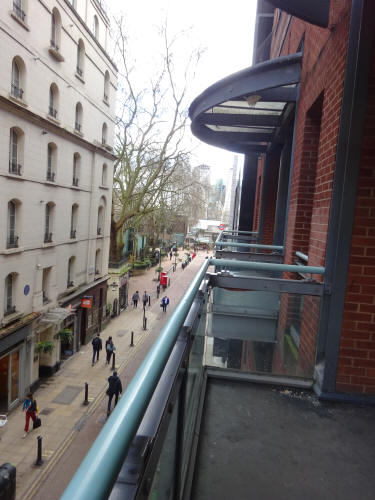 The walkway is alongside the station at Charing Cross, and affords many photo opportunities here too. 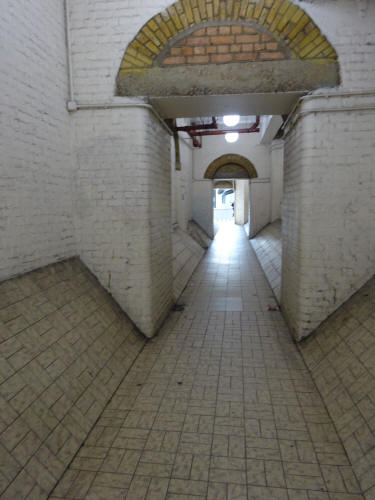 Just before getting to be level with the embankment station, there is a small tiled walkway as part of the grand tour. 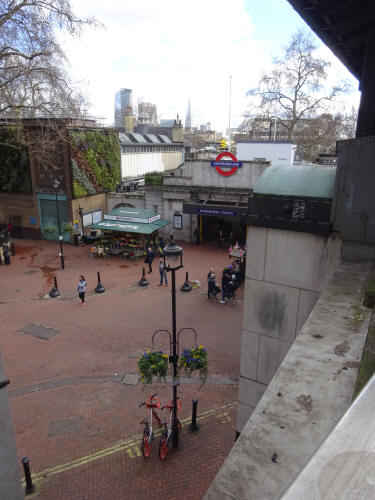 It is a no-brainer, but just keep walking, and enjoying the views from a raised platform above street level. 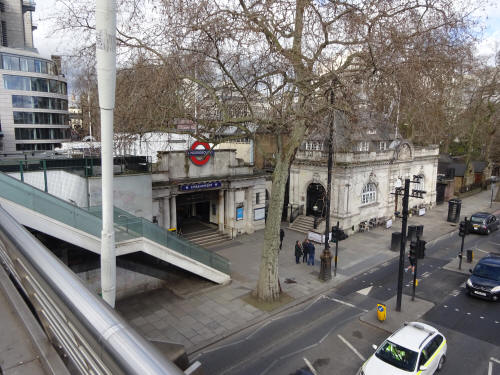 We have now got the starting point, at the top of the stairs looking down on embankment station, and the building next to it is called Hungerford House. This was formerly an electricity generating station. 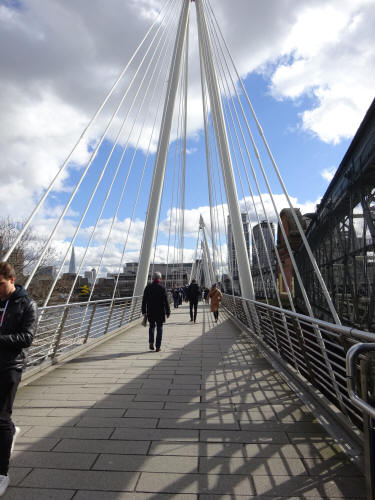 Golden cross bridge, a pedestrian walkway, and looking across the River Thames, in March 2020 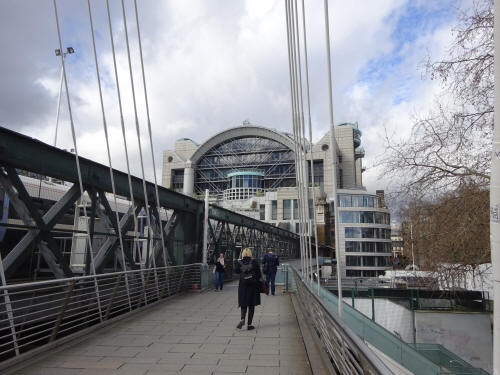 The main reason for my being on this bridge was to take a picture of what was once the new Hungerford market (1830 to 1860). as this picture is quite similar to the original design of this market.

And as you wander across the bridge, there are stunning views of the River Thames, the skylines, and the London Eye is very close too. The walk ends at Southbank where there is a lift or stairs to exit the bridge. It is dirty, but it probably works. 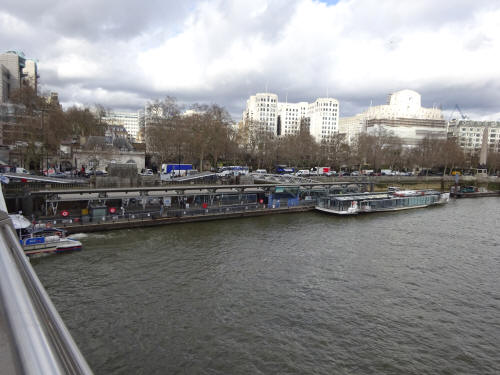 The River bus station near to Embankment - in March 2020

I get a 50% discount on this service, and must try it out at some stage. At today's prices an adult roamer fee appears to be £17.80 for all day. I could spend the entire day on the river for less than £9. This is a must for the future sometime!

I may add more pictures and stuff to this page sometime.

My next walk is along the Strand, starting from Charing Cross station.