Roman London, the origins of the London city walls

There is much conjecture about the origins of the London city walls. 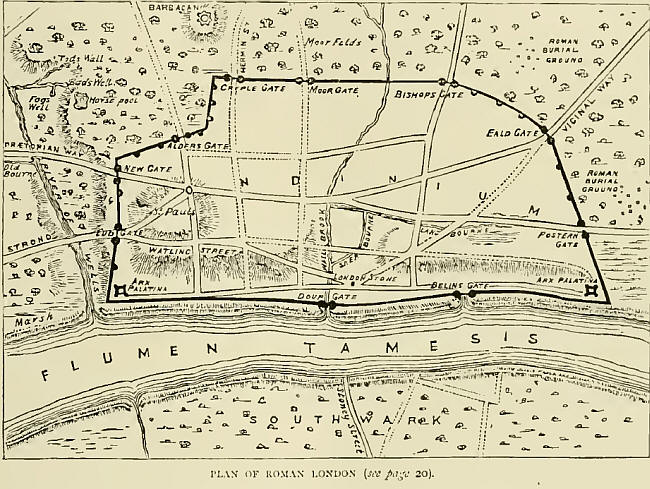 The line of the Roman walls ran from the Tower straight to Aldgate ; there making an angle, it continued to Bishopsgate. From there it turned eastward to St. Giles's Churchyard, where it veered south to Falcon Square. 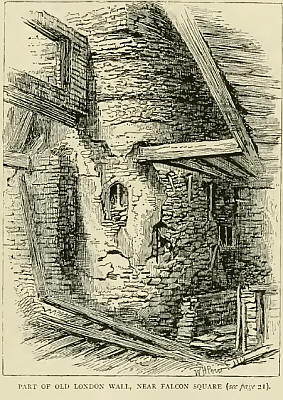 At this point it continued west to Aldersgate, running under Christ's Hospital, and onward to Giltspur Street. There forming an angle, it proceeded directly to Ludgate towards the Thames, passing to the south of St. Andrew's Church. The wall then crossed Addle Street, and took a course along Upper and Lower Thames Street towards the Tower. In Thames Street the wall has been found built on oaken piles ; on these was laid a stratum of chalk and stones, and over this a course of large, hewn sandstones, cemented with quicklime, sand, and pounded tile. The body of the wall was constructed of ragstone, flint, and lime, bonded at intervals with courses of plain and curve-edged tiles. 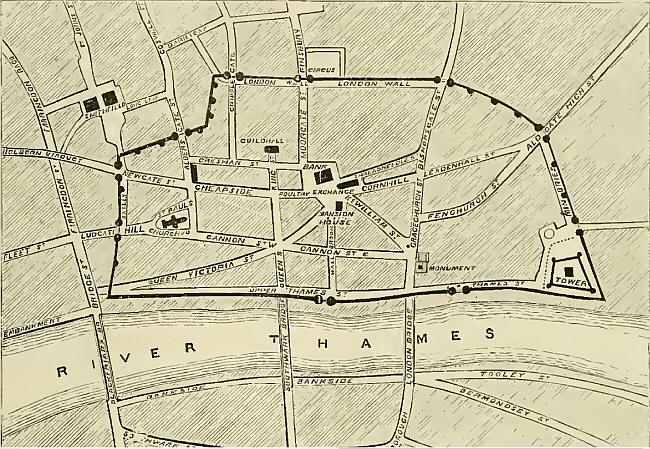 Stow talks about 296 AD as the earliest writings describing this wall around London.

... "but this city of London was also walled with stone, in the time of the Roman government here, but yet very lately, for it seemeth not to have been walled in the year of our Lord 296, because in that year, when Alectus the tyrant was slain in the field, the Franks easily entered London and had sacked the same, had not God, of his great favour, at the very instant, brought along the river of Thames, certain bands of Roman soldiers, who slew those Franks in every street of the city."

"In a few years after, as Simeon of Durham, an ancient writer, reporteth, Helen, the mother of Constantine the Great, was the first that inwalled this city, about the year of Christ 306; but however those walls of stone might have been built by Helen, yet the Britons, I know, had no skill of building with stone, as it may appear by that which followeth, about the year of Christ 399, when Arcadius and Honorius, the sons of Theodosius Magnus, governed the empire, the one in the east, the other in the west; for Honorius having received Britain, the city of Rome was invaded and destroyed by the Goths, after which time the Romans left to rule in Britain, as being employed in defence of their territories nearer home, whereupon the Britons not able to defend themselves against the invasions of their enemies, were many years together under the oppression of two most cruel nations, the Scots and Picts, and at the length were forced to send their ambassadors with letters and lamentable supplications to Rome, requiring aid and succour from thence, upon promise of their continual fealty, so that the Romans would rescue them out of the hands of their enemies. Hereupon the Romans sent unto them a legion of armed soldiers, which coming into this island, and encountering with the enemies, overthrew a great number of them, and drove the rest out of the frontiers of the country; and so setting the Britons at liberty, counselled them to make a wall, extending all along between the two seas, which might be of force to keep out their evil neighbours, and then returned home with great triumph. " [ this I believe refers to Hadrians wall ].

- and five hundred years on, London is again described, by Stow ....

"This city of London having been destroyed and burnt by the Danes and other Pagan enemies, about the year of Christ 839, was by Alfred, king of the West Saxons, in the year 886, repaired, honourably restored, and made again habitable. Who also committed the custody thereof unto his son-in-law, Ethelred, Earl of Mercia, unto whom before he had given his daughter Ethelfled.

And that this city was then strongly walled may appear by divers accidents, whereof William of Malmsbury hath, that about the year of Christ 994, the Londoners shut up their gates, and defended their king Ethelred within their walls against the Danes."

In the year 1016, Edmund Ironsides reigning over the West Saxons, Canute the Dane bringing his navy into the west part of the bridge, cast a trench about the city of London, and then attempted to have won it by assault, but the citizens repulsed him, and drove them from their walls.

Also, in the year 1052, Earl Goodwin, with his navy, sailed up by the south end of the bridge, and so assailed the walls of this city.

William Fitzstephen, in the reign of King Henry II., writing of the walls of this city, hath these words: “The wall is high and great, well towered on the north side, with due distances between the towers. On the south side also the city was walled and towered, but the fishful river of Thames, with his ebbing and flowing, hath long since subverted them.”

By the north side, he meaneth from the river of Thames in the east to the river of Thames in the west, for so stretched the wall in his time, and the city being far more in length from east to west than in breadth from south to north, and also narrower at both ends than in the midst, is therefore compassed with the wall on the land side, in form of a bow, except denting in betwixt Cripplegate and Aldersgate; but the wall on the south side, along by the river of Thames, was straight as the string of a bow, and all furnished with towers or bulwarks (as we now term them) in due distance every one from other, as witnesseth our author, and ourselves may behold from the land side. This may suffice for proof of a wall, and form thereof, about this city, and the same to have been of great antiquity as any other within this realm.

Bastion of London Wall, Cripplegate, in the present state - circa 1866 (from a sketch by Percy Justyne)

Dr. Hughson references the the course of the old walls as traced and described, as such:

'The walls commenced at the Tower of London, eastwardly, and passed between Poor Jury Lane and the Vineyard to Aldgate, in which extent between Wall's Court and Black Horse Alley was a bastion, and another opposite Weeden's Rents, a distance of eighty two perches. From Aldgate, the wall formed a curve between Shoemaker Row, Bevis Marks, Camomile street, and Houndsditch, fenced with three bastions, one opposite Harrow Alley, a second opposite Bowle Court, and a third between Hand Alley and Castle Yard, and abutted at Bishopsgate, a distance of eighty-six perches.

'Thence taking a westerly direction through Bishopsgate Churchyard, it continued its course behind Wormwood Street and Allhallows Church, the back of Bethlehem Hospital, where Part of it is still standing, till it reached Moorgate, at the end of Coleman Street: continuing in a straight direction, it abutted at Cripplegate, at the distance of one hundred and sixty two perches. Hence it continued westernly, along the back of Hart Street and the back of Cripplegate Churchyard, where, opposite Lamb's Chapel Court, was another bastion. From this place the wall took a southernly direction, between Castle Street and Monkwell Street, in which small distance were no less than three bastions at the back of Barber Surgeons' Hall: we pursue its course at the back of Noble Street, till we come to Dolphin Court, opposite Oat Lane, where another bastion was erected; it then again proceeded westernly to Aldersgate, at the distance from Cripplegate of seventy-five perches. Keeping along the back of St. Botolph's Churchyard, it continued by the back of Christ's Hospital and the New Compter, where it again formed a curve to the south of Newgate, in which space were two bastions. The distance from Aldersgate to Newgate sixty-six perches. Keeping at the back of the present prison, the wall passed the ends of the College of Physicians, Warwick Square, the Oxford Arms Inn, Stationers' Hall, and the London Coffee-house, Ludgate Hill, where it abutted at Ludgate, the distance being forty-two perches. From Ludgate it continued by Cock Court to New Bridge Street, where remains of it are at present very perceptible, whence it proceeded along the Fleet Ditch to the east side of Chatham Square and to the Thames, at the distance of one hundred and thirty perches, making up a total of two miles and six hundred and eight feet in circuit.' The City gates were pulled down with the bars, except Temple Bar, in 1760.

[A rod, pole or perch is an imperial measurement of about 5.5 yards, approximately 5 metres, in length]