A very quick introduction to the St Katherines docks which are just under 200 years old. I start with describing with the Greenwoods map of 1828 to give an overall picture of this part of London, just to the east of the Tower of London, and in full view of the Tower bridge. You think of the docks as being built on vacant river fronts, or marsh lands, as were the West India docks along Wapping which were first opened in about 1802, by Robert Milligan, a slave trader in Jamaica, who died in 1809, he was prominent in the building of the original docks.

This area of the  St Katherines docks managed to save itself from this destructive process for another 20 years, as the area of St Catherine (note the spelling).

St. Katharine's Docks and Warehouses cover an area of about 24 acres, of which about 11 acres is water, capable of accommodating 120 or 130 ships, besides barges and small craft. The amount of capital originally raised by the company was £1,352,800, plus an additional sum of £800,000. The dock leading from the river is 180 feet in length and 45 feet in width between the entrance gates.

The docks and warehouses cover what was once an entire parish. The construction of the docks and warehouses necessitated the removal of somewhere about 12,000 persons.  On the original site was an old hospital, founded in 1148 by Matilda of Boulogne, wife of King Stephen. The houses were of the lowest character, and the population was of the vilest description. Prior to the establishment of docks, and the erection of efficiently-secured warehouses in connection with them, there were hosts of river robbers, of various sorts, many of whom herded onto the site of St. Katharine's Docks.

The hospital, was removed to Regent's Park. The last service in the old chapel was on the 30th October, 1825.

If you view this on a modern map, the shape of the original dock has changed very little, although the contents, i.e. the millionaires yachts, and the buildings are now very different.

The Layers of London site also includes many brilliant maps of early London, and you can select a number of maps to view an area. I always use the 1799 Horwood map by default as it is very detailed, and often has street numbering.

Here is the same area of London in 1799, there are no docks, just a number of streets and a church, in fact this is St Catherines church: 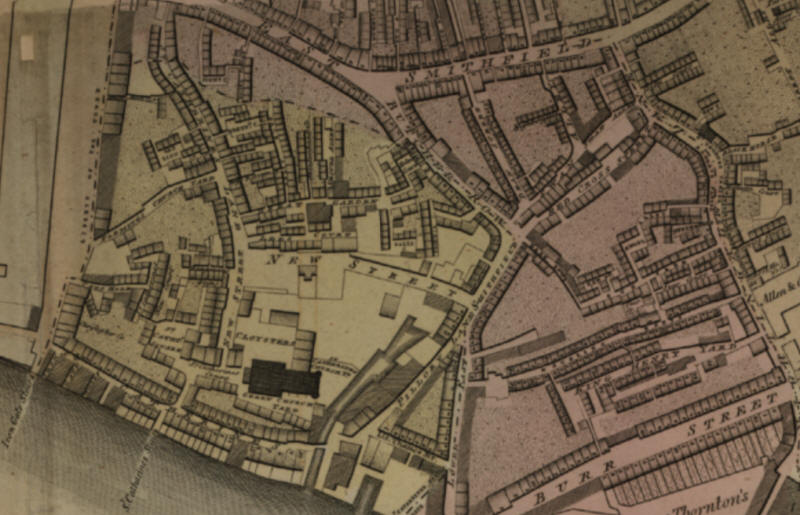 The area cleared from the Tower on the west, Nightingale lane across thwe northern extremity and west of Burr street are completely annihilated. As I list below.

I will describe some of these streets from the 1810 John Locke description of London, these fit in very nicely in describing this above map.

St Catherine's Lane, Upper East Smithfield, at 50, six doors on the R. from Tower hill, leading to St Catherine's street and the Thames (1810).

St Catherine Street, Tower hill, extends from the S. E. corner of it, by the Thames, to Hermitage bridge (1810).

Pillory Lane, lower East Smithfield, the second on the L. in St Catherines Street about 1/8 of a mile from Tower hill, it leads to Butcher Row (1810).

Garden Street (Great), St Catherine's Lane, is the fourth or fifth on the L. from 50, Upper East Smithfield by Tower hill, leading to Helmet court and 30, Butcher row (1810).

Flemings or Flemish Church Yard, Tower Hill. See the following. :
Flemish Street, Tower Hill, on the E. side, and the second on the R. about ten doors from Irongate, it extends to St Catherines lane (1810).

Irongate Stairs and Wharf, Tower hill, on the E. side, at the commencement of St Catherines Street near 1/2 a mile below London bridge.

I have been working through a Robsons directory of 1827 which lists many old public houses, taverns etc in St Catherines street, and clearly they were probably not still there in 1827, the entire area was flattened before the docks were dug into the ground. It will be difficult to ascertain exactly where these public houses were in each street, but it may help a bit.

I have found a rather excellent description in google books, the Beauties of England and Wales in 1815 by the Rev Joseph Nightingale.

"The Queen's consorts of England are by law the perpetual patronesses, this hospital being considered part of their dower; and they nominate, appoint, increase, lessen, alter, or remove old statutes, make new ones, and use unlimited power. Should there be no Queen Consort, the King exercises the same authority; for no Queen Dowager can interfere, the dignity and patronage on her part ceasing on the death of the sovereign. On this account it is called “The Royal Peculiar of St. Catherine.”

These various privileges and boundaries formerly attaching to St. Catherine’s, were acknowledged and confirmed by several English monarchs, when the right being contested by the city, it was granted in favour of the inhabitants of St. Catherine's, or Portsoken; over and above which, they enjoyed many other liberties granted to the citizens of London, “That no arrest, attachment, or execution, should be made by any officers of the King, within the said liberty, either by writ, or without writ, but only by the officers of the city.....”

These valuable privileges, in consequence of usurpation on one side, and through neglect and compliance on the other, have long since become in a great measure a dead letter. To this court, a registrar, ten proctors, and an apparitor, are attached. The Temporal Court here, in which the high steward of the Jurisdiction presides, takes cognizance of all disputes within the precinct, and forms Court-leets, &c. A high bailiff and prothonatory belong to this court; as also a prison, but this has long been disused.

Wapping and the first London docks:

Wapping, which has not been unaptly called “the Port of London,” is by no means of equal antiquity with the metropolis; for though no part of this hamlet below bridge, or below the Tower, was damaged by the great fire of 1666; previous to 1657 it consisted only of one continued street, extending about a mile from the Tower along the river almost as far as Ratcliffe. Both the hamlet and the neighbourhood of Wapping were formerly one great wash, covered with the waters of the Thames; but afterwards having been gained from the river and turned into a kind of meadow-ground, it obtained the name of Wapping Wash, and was defended from the inundation of the river by walls or dikes, which were chargeable to the proprietors.

Between the years 1560 and 1570, this wall was broken in several places, and the whole was again laid under water. Queen Elizabeth at length authorized the Commissioners of Sewers to hold out encouragement to persons inclined to rebuild the wall and take land; and, among the rest, one William Page took a lease of one hundred and ten feet of the wall, laid the foundation of his building, and spent a considerable sum in strengthening the land against the river, with which he proceeded till a proclamation from the Queen, in 1583, Put a stop to all new buildings. Page petitioned; and, some time after, it appears that his building went on again and was completed. How scantily this part, now closely covered with streets, lanes, and alleys, was supplied with houses in the early part of the reign of Charles I. appears from the circumstance of that monarch having hunted a stag on Friday, July 24, from Wanstead, in Essex, killed him in a garden near Nightingale Lane, in the hamlet of Wapping, in which great damage was afterwards done in consequence of the multitude of people suddenly assembled.

Within the last twenty years a very great part of the parish of St. John’s, Wapping, has been excavated for the formation of the London Docks, the express purposes of which were to secure vessels from the various accidents incidental to their being crowded in the Thames, and to prevent depredations committed almost with impunity on their lading. The new Docks now extend along the Thames almost to Ratcliffe Highway, and are enclosed by a brick wall, lined with warehouses. One immense Dock, called St. George's Dock, covers the space extending from Virginia Street almost to Old Gravel Lane, in one direction; and, in another, from Artichoke Lane to the south side of Pennington Street. This dock alone is capable of holding five hundred ships, with room for shifting. Another, called called Shadwell Dock, adjoining, will hold about fifty ships. The entrance to the Docks from the Thames is by three basons, capable of containing an immense quantity of small craft; and the inlets from the Thames into the basons is at the Old Hermitage Dock, at Old Wapping Dock, and Old Shadwell Dock. The whole cover more than twenty acres. The capital of the London Dock Company is 1,200,000l.; and they were at a very great expense in purchasing the houses and streets which stood on the space appropriated to these docks. On the 26th of June, 1802, the foundation of the entrance bason was laid by Mr. Pitt, the Chancellor of the Exchequer. The first stone of a tobacco warehouse; also the first stone for a range of warehouses for general merchandize, were laid the same day.

The warehouses for the reception of Tobacco only are immense. The largest is seven hundred and sixty-two feet long, and one hundred and sixty feet wide, equally divided by a strong partition wall, with double iron doors. The smallest is two hundred and fifty feet by two hundred. Both consists of ground-floors and vaults: the cellars in the smaller warehouses are for wines, and generally contain 5000 pipes. The whole is under the care and control of the officers of the Customs, the proprietors only receiving the rents. The London Docks were first opened on the 30th of January, 1805, when the Chancellor of the Exchequer and the principal Officers of State, were present.